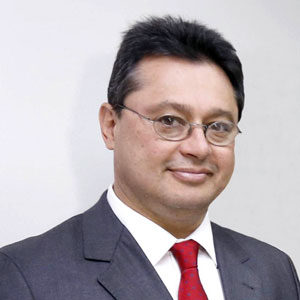 Holds a Bachelor’s Degree in Business Administration (Major in Finance, Minor in Economics) from the University of California at Irvine & Chapman University, Orange, California, USA, and a Master’s Degree in International Marketing from the Scottish Marketing School, Strathclyde University, Glasgow, Scotland, United Kingdom, 1988, British Council Scholar.
He has worked in the private sector as Partner, Director, General Manager, Paraguay Partners S.A., Developer and Executive Director of real estate activities and International Consultant, 1994-1998 and 1999-2000.
Mr. Leite served for 18 months as a consultant responsible for monitoring the Paraguay import market and for several Feasibility studies on the establishment of a Bilingual University in Paraguay, a Commercial and Industrial Free Zone in Alto Paraná, Paraguay (Private Investors) and for Air Cargo for the MERCOSUR Centre.
Served as National Coordinator and Liaison with Local Consultants, Asunción, Paraguay. He has also worked in the public sector as Minister, Executive Secretary of the Technical Secretariat for Economic and Social Development Planning (STP), Office of the President of the Republic.
Co-authored the Government Plan for ECONOMIC AND SOCIAL DEVELOPMENT 1998-2003, adopted by the National Government and was the Government Official Responsible for the Monitoring and Control of the Strategic Agenda of the Cubas Administration, 1998-1999.
Served as Chief Negotiator of international financing through the issuing of Paraguayan Government bonds with Chinatrust Commercial Bank, Chief Negotiator of the lending process between the Republic of China and the Government of Paraguay, Government Official responsible for presenting certain Law Proposals to the National Parliament of Paraguay: Investment Portfolio of the Management of the Social Security Institute (IPS); Capitalization of the Public Telephone Company (Antelco), Electrical Regulating Entity (Enrel); Financial Restructuring.